This was totally an unplanned visit to the Teotihuacan during my official trip to Mexico City. Being a travel person and a blogger, I always love to explore the city and culture even with limited time 😊. We landed on a Sunday morning and Westin had private tour options that you can avail directly from the hotel premise. There are plenty of tour services offered by other companies, given the limited time and lack of research I decided to go with the English speaking guide private tour along with two of my colleagues.

This is my second pyramid visit in Mexico after visiting Chichen Itza couple of years ago which is one of the seven wonders of the world. Of course Egypt has been in my bucket list to finish the best of the best pyramid coverage’s across the world. Chichen Itza was built by the Mayans and the architecture is very different from Teotihuacan.

Teotihuacán is indeed very old built around 100 BC and collapsed a thousand years later and the reasons are not yet known on what could have caused the destruction of this city. Our guide shared a brief history and Teotihuacan was much more than a temple. This place was a large city that once had huge population of ~200K people and nobody knew where the population migrated to in the recent times. It is also not clear on who built the Teotihuacan Pyramids, our guides said it was built by the Aztecs but few others referred to Mayans. Teotihuacan is also called as ‘Place of the Gods’

Things to see in Teotihuacan

This is a large UNESCO site that has a 2,000 year-old history. We were short on time, so visited just the pyramids and did not visit the museum. We spent like 6 hours in total and you can definitely do a full day trip if you want to cover the museum.

Pyramid of the Sun – The largest pyramid at Teotihuacan and the third largest pyramid in the world. When you enter the Teotihuacan site, you will first spot the Pyramid of the sun that is ~75m tall and huge.  There are tons of stone beautifully arranged across the Pyramid perimeter and it’s amazing to see the craftsmanship of the people who built this pyramid. You can get the feeling of the rich culture and the site is well known for its religious presence. 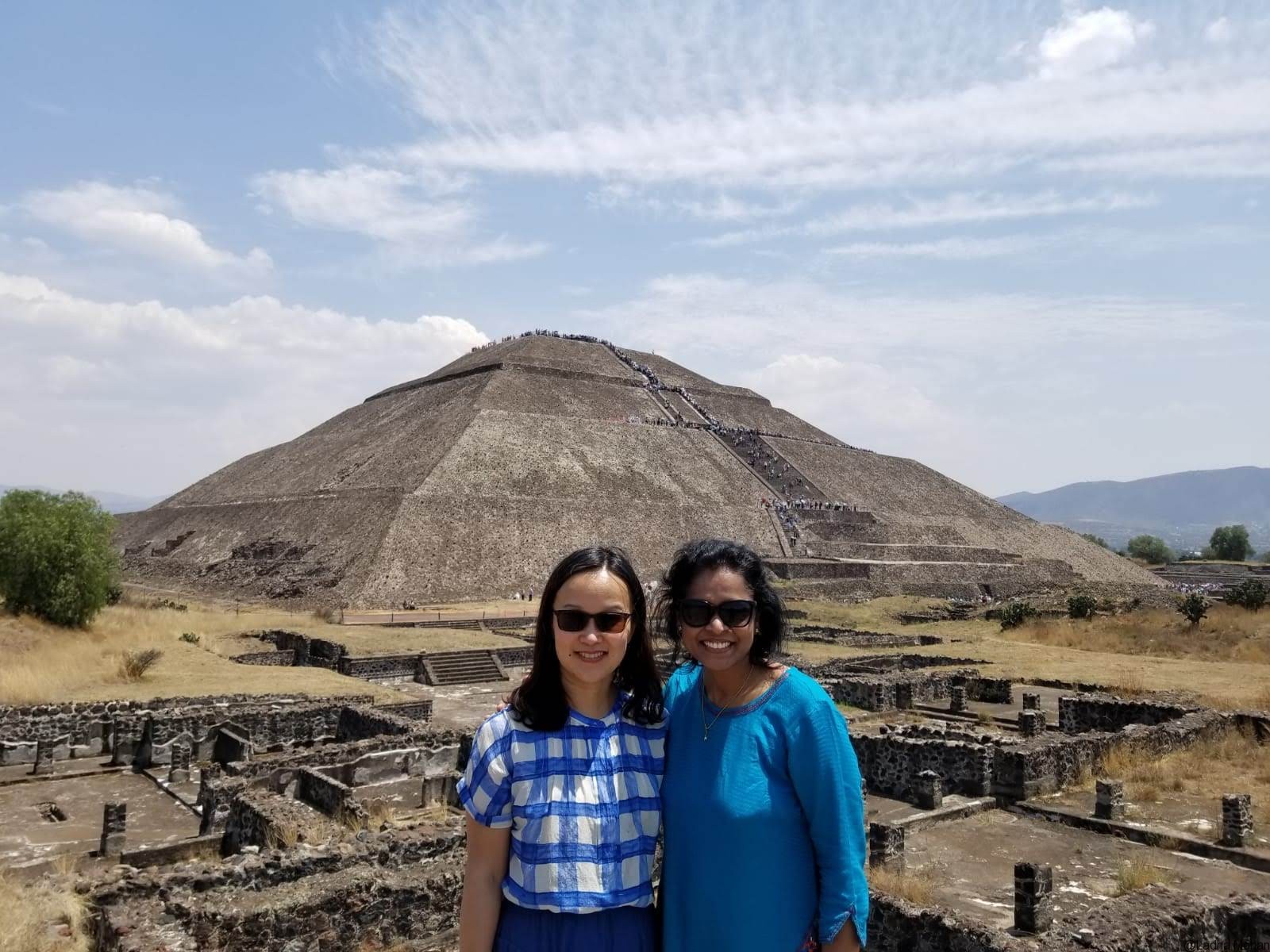 I highly recommend to visit the place early as 8 AM to avoid the crowds and the hot temperature. We went during peak hours around noon time where we had to wait in long lines to climb the top of the pyramid for ~30 minutes. It was definitely worth the wait (ignoring the soaring run rays and sweat) to climb the 300 steps and see the views of the city from the top of the pyramid.

Pyramid of the Moon – The second largest pyramid on Teotihuacan, used to conduct ceremonies in honor of the goddess of water, and earth. This pyramid is not as tall as Pyramid of the sun but brings in the same grandeur, excellent architectural sight and boasts magnificent views. It is surrounded by smaller platforms and is known to be the place where all sacred rituals were conducted. It is believed that human, animal remains and sacrifices  were done at the Pyramid of the sun.

Avenue of the Dead – This is the path between the pyramids in Teotihuacán that is referred to as ‘Avenue of the Dead’ by the Aztecs because the mounds on the sides of the road resembled like tombs. The road is really wide where you start from the Pyramids of the sun and walk towards the Pyramid of the moon at the end. This was built over a channel that is used to drain rainwater into the nearby river and this connects all the monuments in Mexico city. 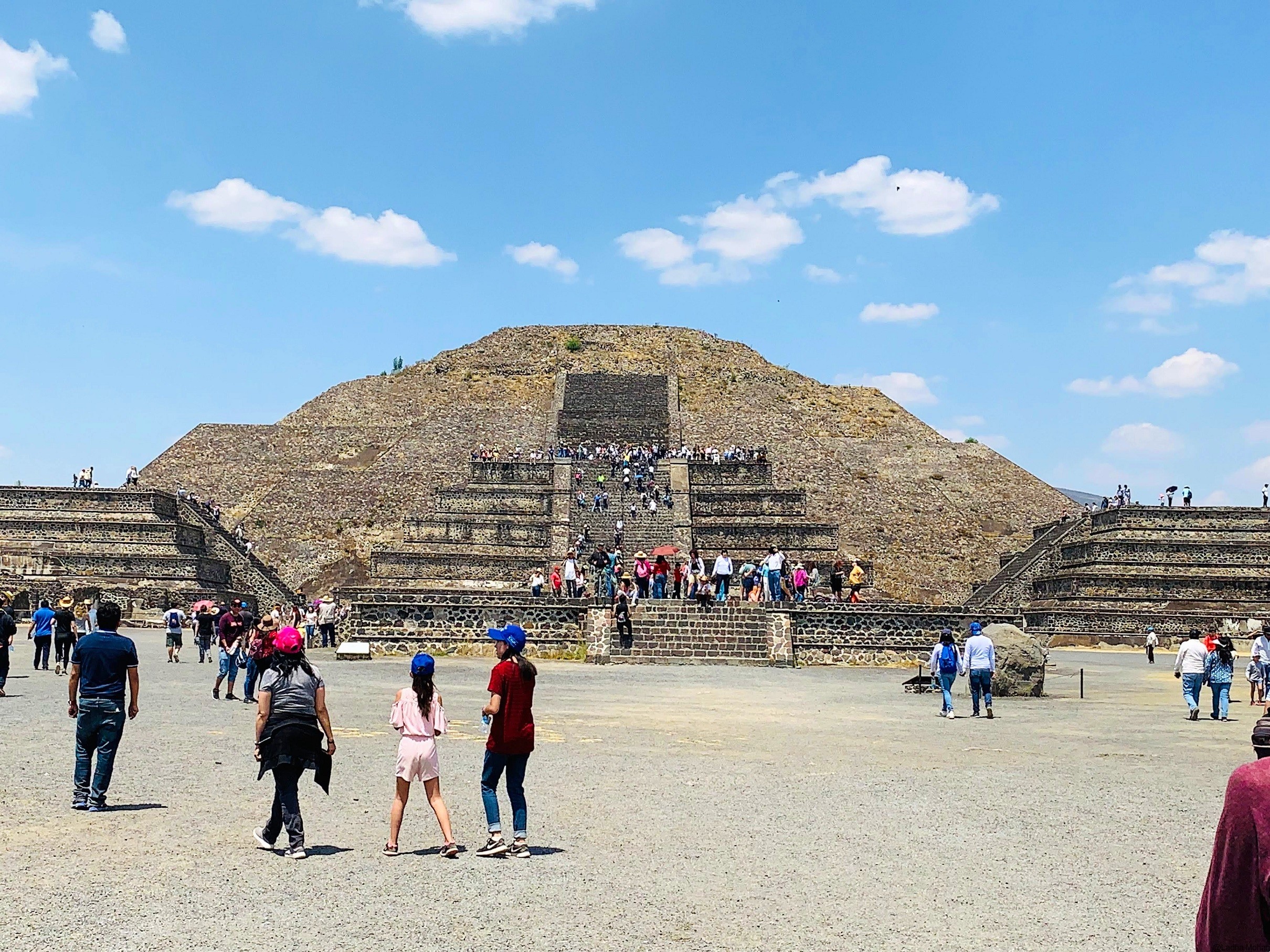 Things to remember when visiting Teotihuacan

2 Responses to "Day trip to Teotihuacan"